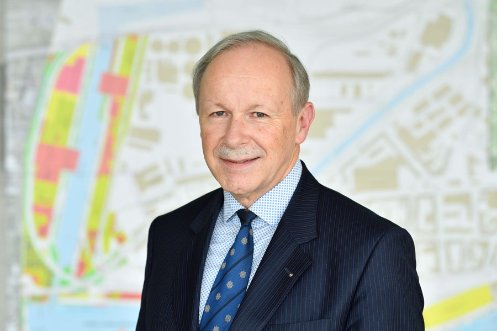 Back in spring, the Cantonal Council of Basel-Stadt first approved the project. Now the sovereign, i.e. the people of Basel, have voted yes in a referendum proposing the development of Hafenbecken/Inner Harbour 3. What is the positive impact for Basel-Stadt and its ports on the river Rhine, at present and in the near future? A brief interview with Hans-Peter Hadorn, Director Port of Switzerland / Schweizerische Rheinhäfen.

Mr. Hadorn, winning the referendum was a major step towards achieving the goal of building a new inner harbour basin in Basel’s Port of Switzerland. What’s next, and when do you expect construction to start?

For us at Port of Switzerland, or the “Schweizerische Rheinhäfen”, for the shipping business on the river Rhine, and for the region of Basel, the decision is quite frankly a milestone. I am extraordinarily happy about the clear and positive vote for the shifting of container traffic and transportation onto railway. Because is a measure to advance climate protection. Accordingly, the planning for Inner Harbour/ Hafenbecken 3 and the Gateway Basel North will move forward. For instance, we have already scheduled the conclusion and submission of the approval procedure regarding the shipping connection plans for 2021.

What are the implications of the decision for the future development of the Kleinhüningen port and more generally for the region in its entirety?

The decision is of major significance for all ports on the Rhine and for Port of Switzerland. The harbours in Basel and shipping operations on the Rhine can grow, as they gain a platform for container transportation – actually something like a main train station. This secures the future of the Port of Basel for decades to come. Basel is gaining significantly in its status as national hub for Switzerland’s logistics and transportation sectors. And the population will enjoy important benefits from the referendum too: For one, they’ll hear, see and smell less noise, pollution and congestion on local streets and in the neighbourhoods. But the decision also clears the way for urban development projects planned at Klybeck and West Quai (on the horizon for 2030).

When will we witness the first unloading of a container vessel in the new Inner Harbour/ Hafenbecken 3?

The positive outcome of the referendum allows us to accelerate planning. We anticipate the first container ship to dock at the Inner Harbour/ Hafenbecken 3 by 2024.

Will the entire region of Basel further increase its standing in the logistics sector?

Basel already is the capital of Switzerland’s logistics industry. Because its located smack in the middle of the passageway from Rotterdam to Genoa, which is Europe’s most important axis for the transport of goods. But the new development of Inner Harbour/ Hafenbecken 3 will also provide the logistics and transportation sectors with an even more forward-looking and efficient main station, a hub for the transport of goods that is connected to the seaports on a level playing field. And best of all: By transferring all cargo and containers from the ships onto the railway, Basel is spared 100'000 lorries and trucks driving through the city each year.