Innovation and growth in Stücki Park 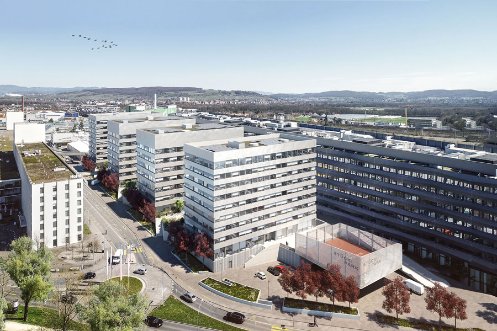 Located in Kleinhüningen, the area offers spaces suitable for retail business, the hotel industry and gastronomy, as well as entertainment, while already being home to more than 2000 jobs in companies such as Lonza, Medartis or one of the 30 start-ups that together constitute the economic ecosystem Technologiepark Basel. This past November Stücki Park was able to inaugurate two additional commercial buildings, one each for office and laboratory spaces. The two new buildings are part of a two-stage expansion project that aims at providing space for up to 4’000 jobs in the mid to long term.

A prominent tenant at Stücki Park is Lonza’s Drug Product Services (DPS) division. Since its establishment in 2016, Lonza DPS has experienced rapid and substantial growth fuelling Lonza’s strong overall expansion at their location in Basel during the last 5 years: Basel has seen the creation of more than 500 new jobs, possibly with more to follow. In November 2020, Lonza DPS has become the exclusive tenant of one of the new buildings in its entirety where, it has 6000 m2 of lab space at its disposal.

Another major contributor to the dynamic development of Stücki Park is Technologiepark Basel and its roughly 30 technology-driven start-ups. Spread out over 7‘000m2 of space, these young entrepreneurial companies have in common that they’re heavily invested in driving innovation on-site, and thus benefit from an environment that fosters the lively exchange and interaction between these rising companies.

The plans for the buildings to be constructed in stage two of the Stücki Park expansion emphasize research and innovation; completion is scheduled for the end of 2023. Once finished, they will offer an additional 13‘000 m2 of combined office and lab space. „The Stücki Park expansion will allow us to offer a lot more modern state-of-the-art spaces, especially to companies attracted to the exciting benefits of the local life sciences cluster that has been growing here for several years. The entrepreneurial and economic possibilities for Basel as a business location and for Stücki Park are enormous“, said Christian Mutschler, Managing Director of Stücki Park.