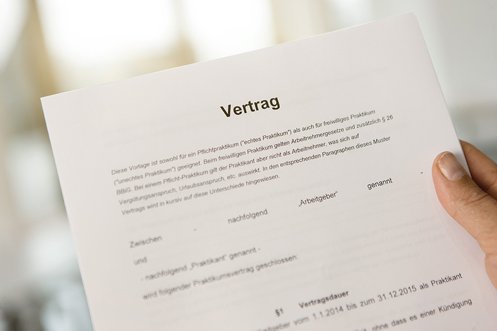 We answer all questions relating to collective labour agreements and standard employment contracts. Information is also provided in respect of the employment of domestic staff including 24-hour care. If you come across indications of labour exploitation in the context of such a 24-hour care relationship or if you yourself are affected by it, you will also find a corresponding reporting form here.

The service Industrial Relations and Arbitration Office (ABZ) is your point of contact for questions about collective employment contracts (GAV). A GAV is a contractual agreement between employers or employer associations and employee associations to regulate the working conditions and the relationship between the GAV parties. It is set down in Art. 356 et seq. of the Code of Obligations (OR).

The normative provisions of a GAV become part of an individual employment contract when it comes into force. They are directly applicable to all employees who are themselves members of a union or staff association if the employer is also party to the GAV. However, such employers usually also apply the GAV to employees that are not member of any association. The mandatory normative provisions cannot be deviated from to the disadvantage of the employees. A GAV is usually concluded with a specific term. During the term, both sides are obliged to maintain peace.

The normative provisions include, among others, matters such as wages, thirteenth salary, reimbursements, continued wage payment in the event of illness, maternity, and military service, holidays, work time regulations, extension of the protection against dismissal.

In the Canton of Basel-Stadt, the collective employment contract (GAV) of Finishing construction industry of Basel, including supplements 2, 3, 4 and 5, applied from 01.05.2021 to 31.12.2022. From 01.01.2023, there is a new GAV for the Basel Finishing construction industry, which is declared generally binding from 01.02.2023. There is a gap in the declaration of general applicability for the month of January 2023.

Gypsum industry in the Canton of Basel-Stadt

The declaration of general applicability (AVE) of GAVs has the effect of extending its personal scope to all employees and employers in the professional or economic sector in the cantons concerned.

SECO keeps a list of the collective labour agreements declared generally binding (in German, french or Italian only).

entered into force in Switzerland on 1 January 2011. The NAV specifies minimum wages that are binding for the whole country.
Gross minimum wages excluding holiday premiums and paid bank holidays amount to:

The new NAV and the specified minimum wages exclusively apply to employment contracts involving 5 hours per week or more. Furthermore, there are restrictions in terms of personal applicability.

The standard employment contract for domestic staff in the Canton of Basel-Stadt governs all contracts involving more than 4 working hours per week and is regulating the working conditions.

Recording of working hours acc. to the NAV for domestic staff, BS