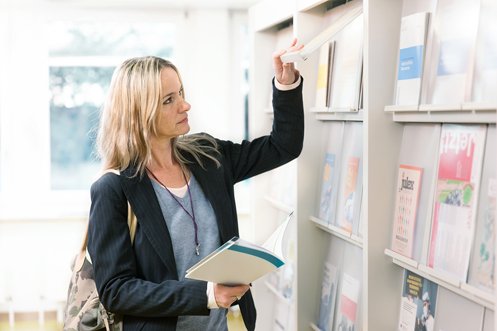 Employment, unemployment and shortage of skilled workers. Here you can find the most important figures and charts for Basel-Stadt's labour market. 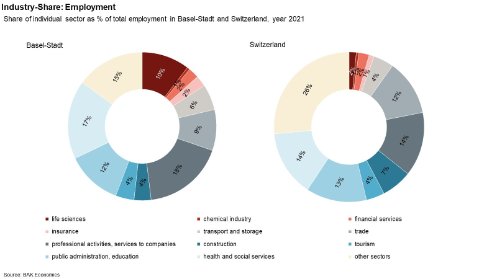 The following analysis shows figures and graphs on sectoral and industry-specific employment trends in the canton of Basel-Stadt from 1970 and 1998 respectively: 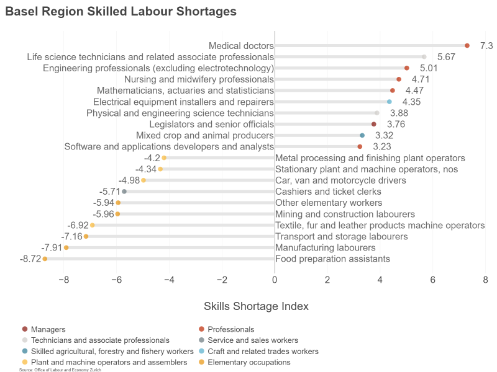 The basic tendency of a relatively high demand for skilled workers in healthcare and the so-called MINT sector (mathematics, information technology, natural sciences and technology) has been an issue on the labour market for several years. According to the job statistics (JOBSTAT) of the Federal Statistical Office (FSO), the number of vacancies in north-western Switzerland increased significantly at the beginning of 2022. JOBSTAT also indicates that recruitment difficulties regarding university graduates, as well as individuals with vocational and higher vocational training have become more acute in numerous areas in 2022.

A further perspective on the subject is provided by a skilled labour shortage index compiled by the Office for Economiy and Labour in Zurich. This index compares indicators of labour demand and supply for different professional sectors and thus offers an approach for quantifying the relative need for skilled labour. Specifically, the indicator consists of the following four sub-indicators: "ratio of vacancies to job seekers", "duration of an employment advertisement", "duration of the job search", and "qualification requirements". The graphic above shows the ten professions with the strongest and weakest characteristics of this indicator in the Basel region. The index indicates a relative need for labour, particularly for skilled workers in technical, intellectual and scientific occupations. In comparison, in the area of unskilled labour, the shortage seems to be less pronounced.

Against this background, the graphic below compares the values of the skilled labour shortage indicator with the respective employment share of an occupational field, as expressed in the size of the respective bubbles. While general office workers and salespersons account for the largest employment share, these two groups show a moderately negative index value. In the groups of skilled trades, agricultural occupations, technical professions, and intellectual and scientific jobs, a general trend towards positive index values can be observed. The latter two groups in particular are also characterized by individual professions with a comparatively high degree of employment. Notably doctors, qualified healthcare professionals, and material and engineering specialists stand out due to the above-average value on the skilled labour shortage indicator as well as in terms of the employment share. 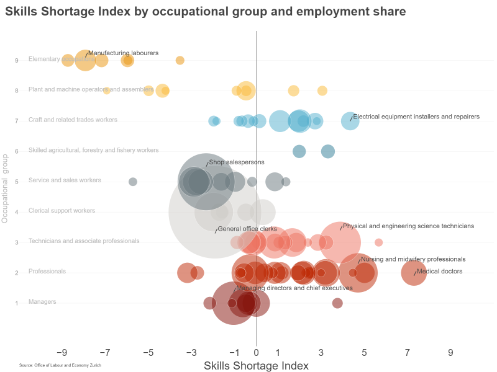 Additional note: The Basel region includes the cantons of Basel-Stadt, Basel-Landschaft, and Solothurn. Occupations are defined on the basis of the Swiss Standard Classification of Occupations CH-ISCO-19, and are considered at the level of the occupational subgroups (CH-ISCO-19 3-digit code, referred to here as "occupations": "Main occupational groups" are in turn recorded at the level of the CH-ISCO-19 1-digit code). The job titles are abbreviations. Due to the form of the presentation and better readability, the female job titles have not been named in the graphics. Gender neutral and male titles are used throughout. The female form is included explicitly.

Statistical Office of the Canton of Basel-Stadt